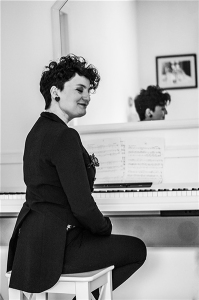 Zrinka Posavec is an academic musician, vocal pedagog, ethnomusicologist, conductor, producer and a poet. Ever since revealing the world of music at the age of five, when she joined a folk company in her hometown, music and dance have been a constant in her life.

After graduating from the Academy of Arts, Department of Music in 2003, Zrinka focused exclusively on training of her voice. Therefore, she enrolled and graduated (in 2006) from the Musical Academy in Zagreb, Department of Music, in the class of Lidija Horvat Dunjko. During her study, Zrinka won several national singing awards. After receiving her diploma from the Musical Academy, Zrinka continued to have her voice trained by the prominent professors and vocal coaches Oliver Miljaković, Vlatka Oršanić, Martina Gojčeta, Vitomir Marof and Ivica Cesarec and attended many seminars and workshops both in Croatia and abroad.

At the same time, she took up ethnomusicology and became very dedicated in writing down and renovating the traditional musical materials from all over the Croatia. She cooperated with numerous folk-art associations in Croatian and abroad, as well as with folk-art schools and institutions dealing with the traditional culture.

Zrinka forged her path as a singer slowly, starting from the folk-art, over the formal education and two graduate studies, to finding eventually a completely new direction to which her heart led her. After the formal education that lasted from 2003 to 2013, in which period she performed in concerts singing opera arias and songs, in 2012, Zrinka Posavec started her own project in cooperation with the musicians Van Bod and Joe Caplowitz under the title “Barok kakav niste čuli” [1]. Besides the excellent pianists’ interpretations, this project offered the audience Baroque arias that Zrinka sang in a contemporary and completely new manner.

In 2013, following her Baroque phase, Zrinka Posavec leaned on her rich experience and started the “Sevdah”[2] project which was a fulfilment of an old Zrinka’s wish of performing specific traditional music in the urban way. It gave her space to express herself fully: she presented not only her solid musical foundations by singing each tone clearly and precisely, but also her immense emotional creativity and personality in interpretation. From its very beginning, Zrinka Posavec has been cooperating with the guitarist Ambrozije Puškarić in this project. Later on, Tihomir Hojsak, the bass player joined the project. Both Ambrozije Puškarić and Tihomir Hojsak are both academic musicians. In 2015, they were joined by Filip Novosel who plays brač[3] and Zvjezdan Ružić, the pianist.

The collaboration with these musicians resulted in a changed colour of sound which is intervowen by elements of ethnic and oriental music and jazz. As the alternative to the urban Bosnian and Herzegovinian music, in 2015, Zrinka and her fellow musicians performed a project called “Panonika” which comprised of the urban traditional folk music which played in the Pannonian part of Croatia and Vojvodina. The songs they played in both of the projects were released on their first CD titled “Pantomima” – SEVDAH I PANONIKA.

Zrinka’s musical style is an intimate, profound and powerful expression of her emotions, and she is using her voice with a superb ease to translate them into various musical situations creating a combination of her personal musical expression and far-reaching very specific traditional urban music.

In her many years of voice training, Zrinka Posavec acquired enviable skills of knowledge transfer in vocal pedagogy. Today, among other things, she works as a vocal pedagogue, teacher and coach to young singers, actors and performers helping them find their own voice and use vocal techniques to bring it up the best possible level.

In 2007, Zrinka Posavec founded a female vocal ensemble called “Zwizde”, and ever since, she has been their art director and conductor. Lead by Zrinka Posavec, “Zwizde” have so far had numerous outstanding performances and projects, and in 2013, they even won the contest Croatian Traditional Music. The most appealing project of “Zwizde” is their performance of spiritual songs dedicated to Virgin Mary called “O gospojo prevelika”[4] in which Zrinka Posavec merges folk singing of spiritual songs by “Zwizde” and her modern-day interpretation.

Furthermore, Zrinka Posavec is the editor and producer of an album recorded by “Zwizde” called “Op, lonci lončići”[5] which is a compilation of secular and traditional songs of Slavonija, Baranja, Srijem and Bačka.

Besides her dedication to music, this distinctive artist also writes poetry and prose. Zrinka’s collection of poetry “Soba za buđenje”[6] was published by “Matica Hrvatska – Đakovo” publishing company in 2015. Her poetry is caught in the moment, describing very clear situations and relationships that surround her. It is a combination of her persistent emotions and perceptions of the inner guidelines that led her in her writing and brought her closer to her true self. Therefore, Zrinka’s poetry is a very strong and important link in the chain of her creative life.

[1] Baroque You Have Not Heard

[2] A traditional genre of folk music from Bosnia and Herzegovina

In some way, duncan`s policies are worse than https://pro-academic-writers.com what we experienced over the last eight years, mr.